Kerala Horticulture Development Programme (KHDP) was initiated in the year 1993 with the financial support of the European Union and Government of Kerala, with a financial outlay of Rs. 130 crores for promoting fruits and vegetable production in Kerala and also to study the feasibility of introducing SHG in agricultural sector.

Activities were first launched in the districts of Thiruvananthapuram, Ernakulam and Kottayam. Over the years, the programme has spread to other districts. KHDP had experimented and refined several agricultural practices, and were able to effectively address the hard felt needs of the farmers. This farmer friendly project has empowered farmers to rise up to the new and emerging challenges in the horticulture sector. As envisaged in the guidelines of the project, the activities of KHDP, after its completion was taken over by the new farmer led company known as Vegetable and Fruit Promotion Council Keralam. 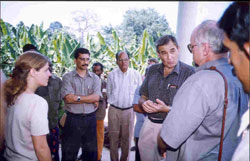 (Source: Excerpts from the study by XLRI, Jamshedpur)