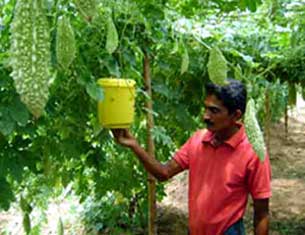 Organic Farming generally implies to modes of agricultural production which avoids the use of synthetic fertilizers, pesticides and herbicides. It also aims in to recreating a virgin earth and a serene and primitive environment through intelligent selection of production procedures. An organic farming system excludes the use of synthetic inputs such as synthetic fertilizers, pesticides, veterinary drugs, livestock feed additives, growth regulators, genetically modified organisms, preservatives, food additives and irradiation.

The health of ecosystem and concerned organisms can be sustained and enhanced by organic farming. All the aspects of crop production starting from farming, processing, distribution to consumption has a say in organic farming. To be specific, organic farming makes it possible to attain high quality produce, nutritious food that can help in preventive health care and well being of all inhabitants. Also as the organic farming progresses, the soil gets richer and this increases the quality of vegetables and fruits.